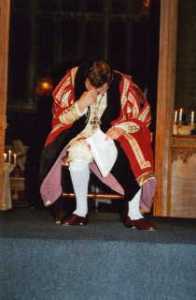 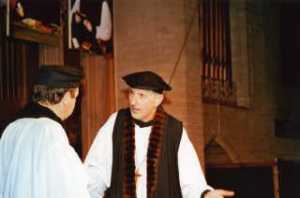 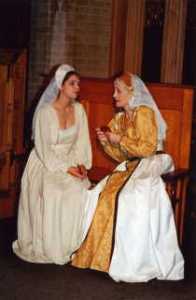 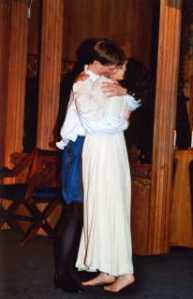 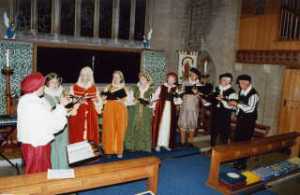 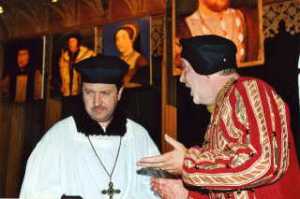 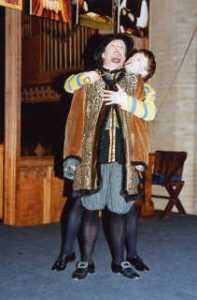 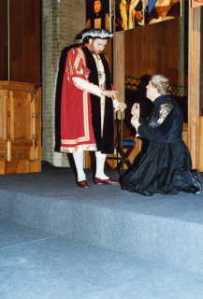 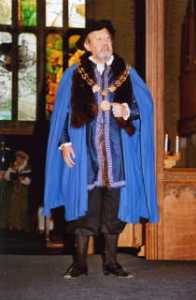 And so, the first of the promised, offerings. With today’s theme being historical, I can think of nothing more appropriate than going back twelve years in time to the marvelous ‘Disillusion’, a standout play for many reasons. Firstly, it was a piece effectively tailored for The Matchbox. Written by Tom Masters (pictured above- the only one not looking like he’s from the 16th century), whose family have long been associated with the group, this was to be a premiere production. Though not quite commissioned, it was written with The Matchbox in mind and, following a convivial read-through of the first draft around Normanhurst some time in 2002, it was trimmed down, fine tuned and eventually Tim Pearce agreed to direct. As you can see from the photos, it was staged in St Francis’ Church in full Tudor finery, little set being required as the atmosphere of the building contributed beautifully to the historical sense of the play

An epic sized cast of faces old and new was called upon to bring to life the turbulent period of religious upheaval, conspiracy and treachery surrounding the English Reformation and the marriages between Henry and Anne of Cleves and Catherine Howard.This latter relationship formed much of the backbone of the play as I recall, and saw the debut of Louise Johnson who performed with us for a number of years after. The piece also saw Jerry Moore join us in ecclesiastical form and would lead to a number of smashing performances in many roles to come (we still hope you will come back and cameo for us at some point Jerry 🙂 ).

Other highlights included Gill Challenger as Anne, a splendid character turn that brought a vein of perfectly delivered humour to the piece; John Mackintosh reprising Cromwell from ‘Seasons’ in stonkingly manipulative and sinister form; a beardless Tim  and wonderfully evocative live choral music which added immensely to the tone of the play.

Personally it was my first outing as Henry VIII ( a role I missed out on in 1999’s ‘A Man For All Seasons’, though I managed to make it for the reprise in our thirtieth anniversary.), ironically as the older,syphilitic monarch, not playing the younger king until recently in ‘Anne Boleyn’. I am forever grateful for being able to discover my inner Tudor, pus-ridden sores and all.

I don’t know the fate of the piece, or if indeed Tom wrote any more. I am certainly glad that this one made the stage and we had a chance to bring his words to life. It remains to this day one of my stand out plays and I am so glad that, thanks to K Isom’s archive, I have been able to share just a few of the pictures from it today.

Matchbox is an amateur theatre group based in West Wickham who have been serving the community at St Francis Church Hall since 1981.