Behold the devastating legal team assembling to get to the bottom of things in the swift approaching, ‘Witness of the Prosecution’. Yes, production week is upon us and with but one more dress rehearsal to go, we are almost ready to go to court on the matter.

As one would imagine with a piece written by the grand dame of Crime fiction herself, Agatha Christie, this has proven to be a popular draw for audiences and both Thursday and Friday are near sell outs with a few tickets still left for Saturday. There is good reason why the BBC, in the wake of their tremendous success with ‘And Then There Were None’ last Christmas have chosen the play as this year’s festive offering. A marvelous mixture of whodunit and courtroom procedural drama, it offers a colourful collection of characters from across the social spectrum, a dastardly crime and a variety of narrative threads and red herrings that will leave the audience guessing until the play’s very last twist. And all this set to a distinct 1950s period flavour and meticulous sense of detail which promises engagement and immersion throughout.

So, if you haven’t bought a ticket there is still time, no question it promises to be a wonderfully enjoyable show. I’ll be back with my summary remarks before curtain up on Thursday, but for now I’ll leave you  with this suspicious bunch of ne’er-do-wells. And who are these coves? Well you’ll have to wait until curtain up to find out. 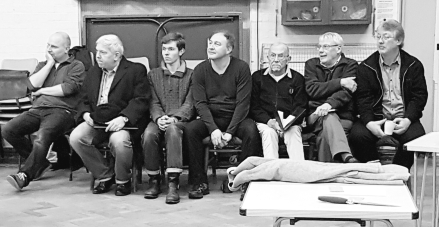 Matchbox is an amateur theatre group based in West Wickham who have been serving the community at St Francis Church Hall since 1981.